Wheaton Squier is deeply involved in theater and music arts, acting in dozens of plays in Rutland and Bennington counties, and singing as a core member of Northern and Village Harmony, the Washed Up Beulah Band and others, both as a camper and as a teacher. He has directed a number of Theater in the Woods plays and brings his extensive knowledge of and comfort in the woods to the camp.  Having grown up with Theater in the Woods as an audience member, actor and director, he is very excited to be able to continue being involved with bringing this wonderful experience to the next generation of young actors. 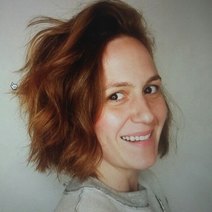 Meg Bouchard has been a professional actor since childhood, with credits on both coasts. She is currently the Educational Director of Off The Hook, the educational outreach wing of Falconworks, based in Brooklyn (Community Theatre of the Year, The Village Voice, 2016). Meg conducts theater workshops, mentors young playwrights, and directs the one-acts that students create.  As a boon from the universe, Meg jumped into our first camp in 2016 with all her heart and as a volunteer, teaching acting and clown work, and curating and co-directing the original play, The Unknown Tale.

Meg moved full-time to Middletown Springs in 2017, the better to pursue Theater in the Woods' creative endeavors. 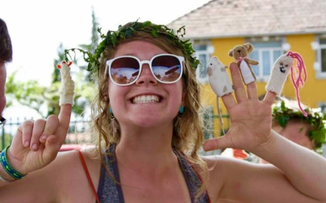 Rainbow Squier is a veteran of Theater in the Woods plays at SolarFest for the past 15 years as an actor, costume designer, and singing between scenes. Music, art and theater play a big role in her life; sharing this passion with kids is a natural calling. Rainbow also co-directs and cooks for Garden Camp at the Tinmouth Elementary school since 2012. She's excited to be a part of Theater in the Woods Camp where she can pass on the unique and enriching experience she grew up with. After 2016's camp it was clear to us that she needed to join the team as a director. Her bubbly spirit and breadth of understanding of our world bring out the best in kids. 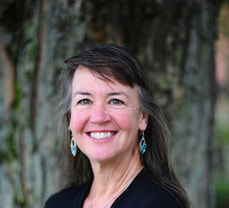 Melissa Chesnut-Tangerman has worked with hundreds of children in performance arts: as music teacher at Long Trail School for eleven years, director of homeschool and after-school choruses in Middletown Springs and Tinmouth, music director for musicals at Long Trail School and Mill River UHS, for many years as the choral elective teacher at Green Mountain Suzuki Institute in Rochester Vermont, and currently as the alto in the quartet Ah! Cappella for the Vermont Symphony Orchestra's Music-in-the-Schools program. Melissa directed the first four years of SolarFest Theater in the Woods plays.

​Melissa has extensive administrative experience: as co-executive director of SolarFest and later President of its board for many years, as SolarFest’s volunteer coordinator for 15 of its 20 years; as President of the board of Counterpoint for two years; as Chair of the Long Trail School’s Arts department for several years. She created and executed for four years a curriculum for Long Trail’s middle school students that incorporated teamwork, self-knowledge and connection to the woods, culminating in overnight stays at her home woods.

​Her passion is to help young people build true connection to the natural world and to know themselves in it.

Scott is a director, thespian, musician and writer.  In his twentieth year of teaching English and Public Speaking at Poultney High School, his passion for the clarity and power of the spoken word go well beyond the classroom: he served as the PHS drama director for over three years (Jookalorum!, Pollyanna, Up the Down Staircase, John Lennon and Me, Thirty Reasons Not to Be in a Play) and for the past seven years he has been the lead teacher and coordinator for the national recitation competition, Poetry Out Loud.

He'll share all his talents during the Wolves camp, July 13th-24th.

Since we started in 2016, we've had the immense fortune to have Olivia Lane, of Long Trail and University of the Arts, aid and abet all things from art table and intricate skin adornment to snack slinging to singing to improvising and most of all laughing.